Recently, I had the opportunity to spend time with the five independent Baptist missionaries / pastors (another man working in Thessaloniki couldn’t join us) that are serving the Lord in Greece. We spent roughly two days and one long night fellowshipping, praying, posing deeply challenging theological questions to one another (we’re still grappling with some), and eventually talking about church planting. We all had a great time but Taki, the missionary / pastor whom I work with full time, and I began to dive deeper into the reality of church planting in Greece later in the evening. It’s amazing what three or four hours, dedicated to how we can better serve the Lord, can alter best laid plans.

As much as I love the island and people of Zakynthos where we live and work presently, I’ve never planned to stay here beyond our first term. We committed these years to learning the Greek language and assisting our friends, Taki and April Korianitis, grow the ministry here and then head to the mainland to establish a similar church. I have long held that Zakynthos doesn’t need two Baptist churches yet as we’re still working hard to fill up the one we have. I still hold to that belief but God showed me it is more important to follow Him than to attempt to cut a road of my own. My plan was to identify a city that would be the most receptive to the Gospel, move our family there, begin the task of evangelizing, and plant a new Baptist church. I know this method works but is it the best one to reach Greeks?

I have long known church planting in Greece is an extremely difficult task. Pastor Taki has told me, in his experience, the average time to lead a Greek to Christ and join the church is nine years. During our visit, all the missionaries shared their difficulties in building a decidedly Greek church. One man is pastoring a church predominantly composed of Filipino believers… in Central Athens! Another has a small Greek church but the Lord is blessing him with a tremendous ministry to Muslim refugees. The others have yet to accomplish the goal of starting a new church. I started to feel a bit overwhelmed by what the future might hold. Maybe everything I’ve learned about church planting won’t work here. How could that be?

Later in the evening, as Taki and I talked, he asked, “After 20 years, would you be satisfied pastoring the same church you planted?” That is when it hit me… we’re trying to force a square peg in a round hole. That is certainly not where I envisioned myself  to be in 20 years! I figured I’d be on my third or fourth church in that time but Taki’s honest assessment of his own experience opened my eyes. The tried and true method of church planting in the 20th and 21st Century is not working in Greece. The role of the missionary, especially a non-Greek, must be reconsidered and reformed. As we talked, many realities became so much clearer to us. How could we have missed such obvious signs? The most important thing is that we’ve decided to do something about it and we have purposed to do it together.

We talked of the biblical church planting model of the 1st Century found in Acts.Two men working together itinerantly, evangelizing cities along a route to establish small groups of believers who would become churches such as those found in Corinth, Thessaloniki, and Philippi. Hey, these are cities in Greece! Was the Apostle Paul was on to something regarding Greek missions? Maybe this old method is the best new way to establish churches in Greece? We are convinced, more than ever, that it is and we’re making plans to update and apply these principles and get busy with the work.

Modern communications such as radio and easily printed newspapers and other literature will take us from town to town. Websites will allow us to connect instantly with searching souls, and possibly believers, who are longing to join together. We will meet regularly with small groups along the route, preaching and teaching to ground them in the faith. We will identify, train, and ordain Greek men to eventually become the pastors of new IFB churches, and we will continue to assist them in the work of the ministry.  We believe God will continue to grow the work on Zakynthos as we labor here together to build a “mother” church that the Lord will use to birth indigenous churches across Greece. We realise we must stay this course and we must keep our eyes on the Lord for direction and wisdom. We’re convinced this is the way in which we must walk if we’re to effectively reach the people of Greece for Christ.

Is it a long and hard road? Yes, but it’s also an old road God has placed in His scriptural map that we might follow and see Him work again to establish lighthouses across Greece to illuminate the path of 12 million souls to find Jesus Christ and the free gift of salvation He offers. 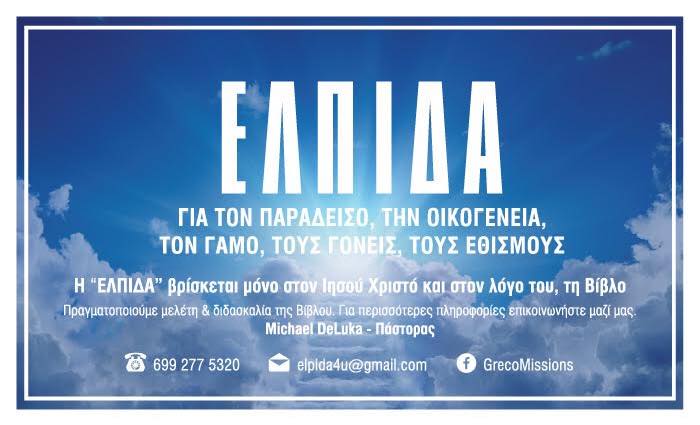 Please pray for the DeLuca Family.